For ten days in late June and early July 120 youth took part in the Aida Youth Centre Summer Camp in the Aida Refugee Camp. This was the 15th summer camp held by the Aida Youth Centre and the second supported by the Walled off Hotel. The camp, organized by a group of volunteers headed by the center’s director, Anas Abu Srour, consisted of five cultural units, which, along with multiple field trips, allowed the participants a break from traditional classroom learning.

There was no fee for youth to participate in the summer camp however, there were some occasions when small contributions were asked for to cover the costs of day trips.

Participants, all residents of the Aida Refugee Camp, ranged in ages of 6-15 and were broken up into age appropriate “scout groups” throughout the nearly two-week camp where they took part in a variety of culturally enriching activities. These include music, art, theatre, athletics and the study of cultural issues.

“This camp is very important for the children,” Srour said. “Because it (helps) develops their skills, it’s a place for them to play freely; it’s a safe place for them.”

Participants were clad in maroon camp T-shirt while instructors and volunteers wore green. Both showed the Key of Return on the front and the inscription “Walled off Hotel” above it.

“Honestly when I visited the summer camp and I saw the activity. It was like one of the best moments of my life to see that I’m doing to something for kids,” Wisam Salsaa, manager and operator of the Walled Off Hotel, said. “They were happy, they were productive, and they’ve done lots of fun.”

The camp, with a large focus on cultural enrichment, did take time for amusement as well. A 30-minute recess every afternoon allowed the children a chance to run and play in the upper floors of the Youth Centre while lunch was prepared.

In the early hours of the afternoon the younger students took part in dance and calisthenics classes while the older students discussed and acted out pieces of theatre.

“Usually in the summer there is not much activities in the refugee camp,” Srour said. “…it gives them the opportunity and chance to be active in the summer.”

Two field trips were organized during the summer camp which took the young participants to Hebron, the largest city in the West Bank, and Ramallah, the government center of the Palestinian Authority.

In Hebron the camp went to the Hebron Ceramics and Glass factory, where they saw glassblowers demonstrate their craft as well as ceramics painters create designs on kiln fired plates. The students also went to the Old City of Hebron where they were given a walking tour and history of the city by a volunteer and coordinator of the organization Volunteer Palestine which ended with a visit to the Ibrahim Mosque.

The last part of the day trip and highlight of the day for many of the campers, was a visit to Al Kuwhuf, or The Caves, a waterpark with multiple artificial caves and several waterslides, which were used en masse.

In Ramallah campers spent the first part of the day touring the Yasser Arafat Museum, learning of the Palestinian leader’s life and legacy. After touring the museum campers and volunteers made their way to Bir Zeit and spent the last hours of the day at a local amusement park.

“The children here, it’s rare for them to go outside (the camp),” Srour said. “Specially to go to places like the Old City in Hebron…some of the instructors, they are 28 years old and even they have never been there.”

The practice of blending cultural education with fun and levity was critical to the success of the summer program, offering participants a chance to leave the camp and explore beyond their own surroundings, if only for a few hours a day. 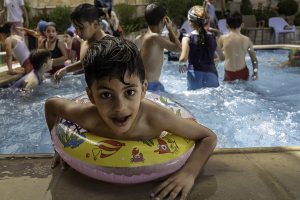 The Aida Youth Center (AYC), in conjunction with The Walled Off Hotel, hosted a 10-days long summer camp in June, 2018 for 150 Palestinian children ages 6-14 in the Aida Refugee Camp in the southern occupied West Bank city of Bethlehem.

With the sponsorship of The Walled Off Hotel, the AYC was able to host a summer camp involving activities that included art, culture, media, sports, theatre, and music, as well as two field trips outside of the camp to the Ein al-Hawiya spring and the Palestinian Museum of Natural History.

For 10 days, the children participated in the camp for four-and-a-half hours each day at a local school in Aida Camp.

Some of the activities included: 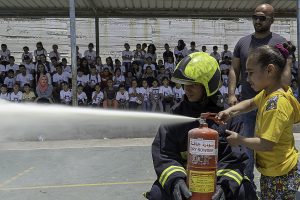 During the camp, children were also provided with transportation, t-shirts, and daily food.

By offering the children a free summer camp, AYC and The Walled Off Hotel were able to offer the children a break from their daily lives in the camp, which according to a recent study, is the most tear-gassed place in the world.

Aida Camp is home to some 6,500 Palestinian refugees, around one-third of them children under the age of 18. There are currently 80 Palestinians from Aida being held as political prisoners in Israeli jails. Among them, are 30 children from the camp.

The AYC was established in 1968 with the purpose of offering the community, specifically children, a safe place to come together and hold events and activities. Since its founding, the AYC has supported education of children in the camp,a youth football team, a drums & scouts team, and a music therapy program. 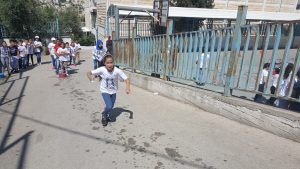