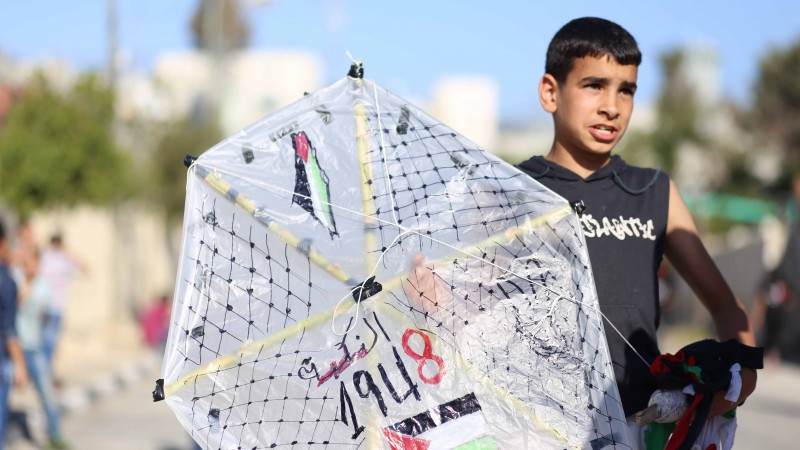 Many of the refugees living in Aida Camp today, and throughout the rest of the Palestinian territories and in other areas, are still awaiting a solution to their problem and the chance to return home. The construction of ‘the largest key in the world’ at the entrance to Aida camp is a peaceful symbolic representation of this right to return. Under international law, all individuals possess ‘the right to return’ – the right to return to their homes of origin when they have been displaced due to circumstances beyond their control. For the specific case of the Palestinian refugees, it also has basis in UN resolutions following the declaration of the state of Israel in 1948.

Even before the declaration of the state of Israel, there is precedent from the British Government, who administered Palestine under a Mandate from 1920 – 1948, to suggest that establishing the country as a ‘national home for the Jewish people’ should not affect the lives of the Palestinians already living there. In the Balfour Declaration in 1917, the British Government declared that:

Following the Arab-Israeli War in 1948, the United Nations passed Resolution 194 (passed December 11, 1948) dealing with the situation in the region of the British Mandate of Palestine at the time. Article 11 explicitly calls for the return of the Palestinian refugees, and is quoted below:

‘Resolves that the refugees wishing to return to their homes and live at peace with their neighbours should be permitted to do so at the earliest practicable date, and that compensation should be paid for the property of those choosing not to return and for loss of or damage to property which, under principles of international law or in equity, should be made good by the Governments or authorities responsible.’

The refugees are still waiting for this resolution to be enacted. Though it should be noted that General Assembly Resolution are not binding, and act as advisory statements, Israel’s admission to the UN in 1949 was conditional upon its acceptance of UN resolutions, including 194. Furthermore, article 11 specifically states an obligation on the part of Israel to ensure the return of the refugees. It also states the exact place of return (their original homes) and that the return is guided by the individual choice of the refugee (‘wishing to return…’).

The right to return is also recognized in article 13 of the Universal Declaration of Human Rights, which states:

“Everyone has the right to leave any country, including his own, and return to his country.”

It is clear under international law that a change of sovereignty does not diminish the rights of ownership, or the territory that would be termed as ‘his country.’ Furthermore, under the Law of state succession, when a geographical territory undergoes a change of sovereignty, the habitual residents of that geography should be offered nationality by the new state.

The International Law Commission, which is a UN body of legal experts, has published a series of articles on Nationality/State Succession which clarifies the status of ‘habitual residents.’ In article 14, they clearly state that ‘the status of persons concerned as habitual residents shall not be affected by the succession of States.’ Furthermore:

‘A State concerned shall take all necessary measures to allow persons concerned [i.e., habitual residents] who, because of events connected with the succession of States, were forced to leave their habitual residence on its territory to return thereto.’

The ILC also states in a later article that such residents are also presumed to have the nationality of the successor state.

It is therefore clear that the Palestinian refugees, as residents of the geographical territory of Israel prior to 1948, have the right to return to their homes, whether from a political, legal or humanitarian perspective.

The Right to Return is not only a legal right for the Palestinian refugees but one that is feasible and possible. Demographic studies have shown that 78% of the Jewish population of Israel lives on just 15% of the land, with the majority actually living in urban areas similar to those in which the Jews lived in pre-1948 Palestine. Only 154,000 rural Jews (2% of the total population) control the land which is essentially the land of the Palestinian refugees. Many villages, such as Imwas, Yalu, Beit Nuba and Kafr Bir’im in the north, are now the sites of National Parks.

For more information on ‘the right to return’ and the case of the Palestinian refugees, please refer to BADIL’s The 1948 Palestinian Refugees and the Individual Right of Return: An International Law Analysis (BADIL, 2007).